I have this song running through my head this morning, Blessings by Laura Story. Yesterday my husband and I were talking to a neighbor who also has a special needs daughter. Many of you know about our Thomas who is also special needs. We’ve been through many, many trials with Thomas. And everytime I hear this song I think of him. What if our greatest trial is God’s blessing in disguise?

Anyway, when we were speaking with our neighbor she mentioned that she often wonders what her daughter would have been like had things been different. My husband replied that he often thinks the same thing about Thomas. I do think that also about Thomas. The big “what if?”  What if he’d been born “normal”?. What if? It almost makes you loathe the word, “if”. That word can hold so much. Thomas is one of the greatest achings of my life. It still pains me that he cannot live at home. I know my husband feels the same. I love Thomas for who he is now, not what he could have been. Thomas being the way he is changed me as a mother. And if I were to be able to change him to a “normal” person, would I then have to change myself to how I was before he was in my life?

I honestly don’t dwell on the what ifs because it is pointless. I tend to focus on the present and future which can hold enough worry all by themselves.  But this song speaks so perfectly to my heart. Especially when she sings, “This is not our home…”  No, this is not our home. I often wonder if when I do meet our Lord will I ask Him questions about my earthly life. Thomas being in the forefront of those queries. Why were we chosen to be his parents? Why did God make things so challenging? Why the heartache? Or will I even care at that point? What I do believe is that when Thomas meets the Lord and joins us, I believe he will tell us himself. It will be glorious to hear my son talk clearly and coherently. I was given a glimpse of this in a dream I had a couple of years ago. Thomas was just a typical teen and him, Alyssa and I were just sitting in our front sun porch talking to one another. I have no idea what we were talking about I just remember Thomas being “normal”. I know when we’re all in heaven together we’ll all talk again. God gave me a preview. 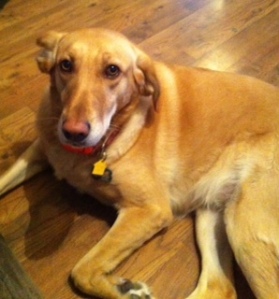 Seriously.  And I can say this because I also have a small dog~a toy poodle aptly named Spike.  Our big dog is named Riley, she’s a rescue dog and we  love her so much.  Of course we love our Spike, he’s been here almost 12 years.  When Daniella was a year old, Alyssa  3yrs  and Thomas 5yrs I decided we needed a dog; a small dog though.  I thought I wanted a Yorkie but the ones we say were either sickly looking or hyper beyond belief.  Then…I met Spike.  Oh my goodness he was just the cutest little thing all fluffy and apricot colored fur.  Draw dropping cute no kidding.  And he wasn’t crazy hyper just normal puppy playful.  Spike also trained super easy which I couldn’t believe, almost everything about him was easy. And he never ever nipped at the kids even with them being so young and active.  Spike really is a great dog.

So 11 years later Tommy and I start talking about getting a big dog.  Just “talking”.  You know because Spike, and 3 cats aren’t enough pets…  We talked for a couple of months trying to decide which kind of big dog.  No puppies we had decided.  I had a German Shepherd growing up (the best dog in the world evah but that’s another story), but we were nervous about getting a well behaved one.  Pitbull?  Yes definitely in the running but again we were wary about being able to handle him/her.  Especially since we’d be taking in an adult dog.

One afternoon I go to Petsmart with Daniella and Samantha to get food for Spike.  There was a rescue group in the back of the store with dogs and cats for adoption.  We saw an adorable Yorkie mix but I knew we already wanted a big dog.  Then we see her.  Riley.  This big golden retriever/golden lab mix missing half of one ear.  Only you didn’t know her ear was missing until you got up close and pet her.  Riley let us pet her, she laid down on the floor of the store so we could keep on petting her.  Meanwhile the rescue foster “mom” was there to answer all our questions.  Jackie was great and just the sweetest.

I text Tommy that we’re at Petsmart and petting a rescue dog.  He texts back, “ok”.  I text: ” I’m filling out an application for her, she’s just the sweetest” and send a picture.  Tommy is like, “…ok…”  Meanwhile I’m  a little nervous.  What am I doing?

Jackie brings Riley to the house for a home visit and Spike and Riley get along so well, it’s unreal.  The cats are wary but what can you expect. We’re ready to tell Jackie to just leave Riley here we don’t want her to go but Jackie isn’t able to because Riley still needs to be micro-chipped. We agree to meet at Petsmart in a couple of days and we’ll take her home from there.

So almost a year later Riley is a part of our family as if she’s been here forever. She is the sweetest dog I’ve ever met. Yes I’m biased but I don’t care ;). When the depression would rear it’s ugly head, Riley was here when everyone else was at work or school. And I would think how she is rescuing me like everyone always says. When Thomas met her and hugged her, Riley just sat there with this adorable look on her face. Spike isn’t the same, he loves us but Riley is unreal in her caring for us. Tommy and I both say we’ve never seen such an affectionate well mannered dog.

I’m so glad I stopped in Petsmart that day.

I STARTED THIS WORDPRESS.COM SITE TO TELL ABOUT MY AWESOME THRIFT FINDS. INSTEAD I FIND MYSELF WRITING ABOUT GOD, OUR SPECIAL NEEDS SON, MY FAMILY AND OF COURSE MY SCORES AT THE THRIFT STORE.

Daily Thoughts and Meditations as we journey together with our Lord.

Was I born a masochist or did society make me this way?

My path back to fitness on a one year delay.

Sharing the love of God through music. My voice, His message. Join the conversation.